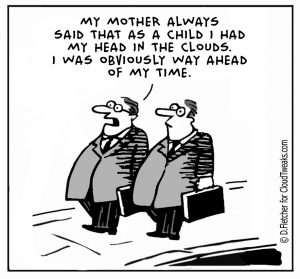 Are accountants right to be sceptical about cloud services? Surely there’s nothing wrong with healthy scepticism?

In fact, being sceptical about the cloud could be very unhealthy for your accountancy practice. In some cases, it could be fatal.

So why do accountants in North London and Hertfordshire retain on-site systems when it could be so much easier using the cloud?

One reason is they fear that the mass of client data they must retain and the financial accounting systems they rely upon will be vulnerable.

In fact, modern cloud services are far safer than any server an accountant or book-keeper in say Camden, Ealing or Harrow, may have in his office. Today heavily-guarded and secure cloud data centres comply with the highest standards. Including ISO27001 for Information Security Management and ISO22301 for Business Continuity Management.

As readers of Accountancy Age know, many accountants have already been persuaded. They’ve made the move and now have competitive advantage over their rivals.

But why do others do nothing? Well, it seems that many accountancy professionals are unsure how to convert all that data into the right format for the cloud.

Nils Solvang from CloudCIO in North London says: “A lot of them really need objective advice about making the transition. They need an independent cloud consultant who fully understands the structures and processes accountants use. Who can identify the best cloud solutions and also re-evaluate their file hierarchy rationalizing the way files are ordered and named.”

Cloud computing – a must for London accountants

Once they’ve migrated into the cloud, the benefits are immediately obvious.

All data is automatically backed up and partners can collaborate and communicate anywhere they work. If there’s snow blocking the roads in Muswell Hill or roadworks in Harrow, the partners can work from home. Productivity improves and clients’ perceptions of the firm are enhanced.

Another issue is that many want to retain financial systems on their premises. They’re reluctant to stop using on-site packages they’ve come to know and trust. In fact there are a number of fully-fledged accounting systems in the cloud now. Including many familiar names such as the Sage One Accountant Edition, the QuickBooks Online Accountant and Clear Books.

Which one suits your accountancy practice can be carefully considered by liaising with an independent consultant who doesn’t have a vested interest in selling you any particular application.

“There really is no need for accountants to be sceptical anymore,” says Nils. “We’ve been tracking the development of cloud services for more than a decade.  A few years ago we would have agreed. It was a leap into the unknown. But now standards are significantly better. To such an extent that the UK government is now fully-committed to moving many of its systems into the cloud. So, if you’re an accountant, what are you waiting for?”

For informal discussion on Cloud Migration in particular contact CloudCIO

Are you at Risk?